The victim’s live-in partner, Maricar Santos, told police that Mangila went outside their house and failed to return after several hours. At around 11 p.m., a neighbor informed Santos that Mangila was seen lying near their house wounded.

Santos waked the victim’s mother Milagros and proceeded to the crime scene where they saw Mangila gasping for his breath with blood oozing from his head. They took the victim to the hospital where he was declared dead on arrival.

Police have yet to determine the motive and the suspects behind the killing. Meanwhile, a 30-year-old market helper was gunned down while two others were wounded during a birth anniversary party in Barangay North Bay Boulevard South, Navotas City yesterday.

Police identified the fatality as Junie Batuhan and the wounded as Margie Carabio, 23, jobless; and Marcelo Espina, 21, a factory worker, all of Barangay North Bay Boulevard South.

Initial investigation showed that Batuhan was celebrating his birthday inside his house at about 1:30 a.m. when two men appeared and shot him multiple times. Carabio and Espina were hit by stray bullets.
Read more at http://www.tempo.com.ph/2015/10/26/tattoo-artist-shot-dead/#IJQXhs8UIgbGmpcZ.99 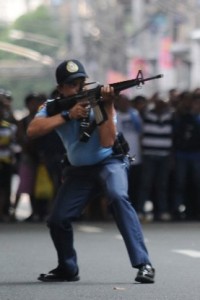 Investigation made by the homicide section of the Manila Police District said that Modrigo came at about 3:45 p.m. to the barangay hall looking for barangay ex-officio member Jose Mondejar and barangay tanods or watchmen.

Modrigo was frustrated after he failed to find them. He went out and fired his improvised shotgun or “sumpak,” prompting barangay officials to seek police assistance. Three policemen from the Smokey Mountain Police Community Precinct led by Chief Insp. Ariel Caramoan responded and chased Modrigo.

He was cornered at the back of Building 9, Katuparan Homes but instead of yielding, Modrigo fired at the policemen who retaliated and killed the suspect. Manila Police District Moriones station commander Supt. Redentor Ulsanoe said Modrigo was high on drugs when he ran amuck. Modrigo had a long rap sheet and was in jail for robbery and also figured in a rape case, among others
Read more at http://www.tempo.com.ph/2015/04/05/cops-shoot-amok/#6ZsCROBPt58Jpt7V.99